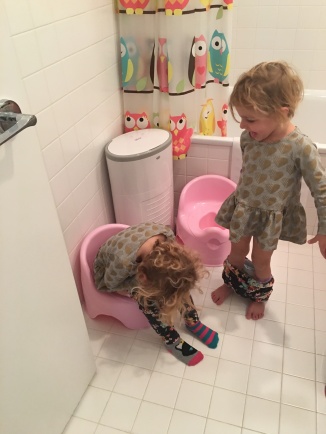 So, I finally, stepped up to accept my, unfortunate, duty as a parent to train my girls to use the potty.  Indeed, freedom from the endless loop of changing diapers, was motivating, but secretly, I hoped to avoid or just ignore it. Would it really matter if they were still in diapers in first or even third grade? Aren’t there worse things to worry about? Sooner or later they would figure it out on their own. Then, we learned that ski school and camp wouldn’t accept them for drop off, untrained. Alarmed, we had a hard deadline in January and had to get to it.

Back when Luca was young, and I was a fresher faced mom, I, enthusiastically embraced these challenges, reading up on all sorts of advice. Unfortunately, all the experts were aligned. Lock yourselves in for three days, take off the diapers, and let it all go. Well, after the shit hit the fan, or in this case, the floor, I was done. NO WAY could I cope with that for 72 hours. Since I had committed to getting rid of diapers, I put underwear on him and continued for another few torturous days; sitting him down every half hour, me next to him, hoping for a miracle.

Fast forward seven years and, despite technology’s evolution (I didn’t even have a smart phone, let alone iPhone, back then), they still don’t have an app for this. Overwhelmed with two of them, I opted for a laid back approach and promptly amazon primed two pink potties, a portable potty for the playground (Kalencom 2-in-1 Potette Plus), two cases of pull-ups, about 20 pairs of disposable underwear, candy, stickers, and extra bottles of wine to set about my task.

It’s been a frustrating few weeks, but real progress is happening. Maxine took the lead, being the most consistent with usage, supported by her utilization of algorithms to calculate optimal candy accumulation per pee or poop, manipulating timing for optimal rewards. Though I am very proud, one downside has been her determination that it’s not worth her time if she needs to do her business during reward blackout periods occurring daily before 7:00 am or after 6:45 pm.

Laurel was also catching up, but mostly on how she can guilt me into also earning candy for doing absolutely nothing but crying and screaming when Maxine gets her rewards. Though painful, I had to wise up to her manipulation and hold her accountable to, at least, sit on the potty to earn a candy treat. Luckily the prospect of a special new Doc McStuffins, or as she calls it, Stuff McStuffins back pack had her in a frenzy. She only needed one poop on the potty and it was hers.

It was an arduous few days when Maxine earned the coveted prize, before Laurel, and, to Laurel’s envy, wore the backpack everywhere, even to bed at night. Luckily, after dragging both potties, the portable potette (which came in very handy during a nature walk on Shelter Island), and everything else we needed for Thanksgiving, to our house in Bridgehampton, we had a breakthrough. After catching Laurel sneaking off behind the sofa to do her business, Mark yanked her into the bathroom. In a critical moment requiring excellent timing and aim (both rare for my husband), to her shock, Laurel nailed it right in the potty.

Anxious to see her rewarded, I jumped the gun. Once she had that backpack strapped tightly on, she immediately went on strike. After two long days, it took the fear of loosing her prize and possibly spending the afternoon with a fictitious babysitter to motivate her back to action. And, while there have been some slight mishaps, I am confident she has turned a corner.

Among so many things I am thankful for this Thanksgiving, having the worst of this job behind me, for the last time, is certainly one I don’t take for granted.

4 thoughts on “Thankful for the Twins Finally Using the Potty”